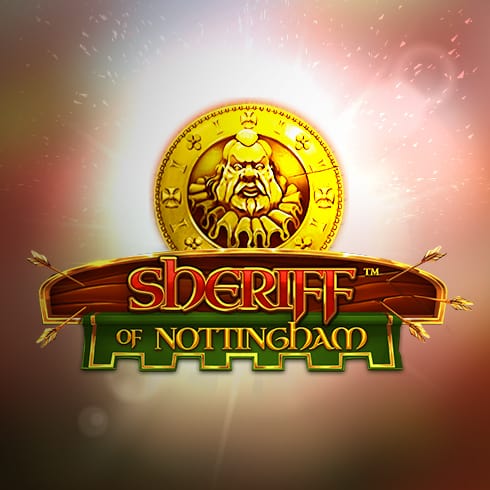 Powered by iSoftBet, Sheriff of Nottingham slot is a five-reel video slot with 25 paylines. Playable across all devices, the slot can be enjoyed by those who want to play casually as well as high rollers on your desktop, smartphone or tablet.

Powered by iSoftBet, Sheriff of Nottingham slot is a five-reel video slot with 25 paylines. Playable across all devices, the slot can be enjoyed by those who want to play casually as well as high rollers on your desktop, smartphone or tablet.

The game is inspired by Robin Hood and comes with various bonus features including a Free Spins round and Wanted Respins where the Merry Men provide cash prizes. Want to know more about this slot and its features? Sit back and enjoy our Sheriff of Nottingham slot game guide!

Appearance-wise, Sheriff of Nottingham slot makes an impact. The game has a fairy tale theme and is based on the tale of Robin Hood. Set in Sherwood Forest, you'll see a castle in the background surrounded by luscious greenery.

The reels are filled with theme-fitting symbols including stylised A, K, Q and J royals as the lower payers. The high payers are represented by trumpets, scrolls, swords and armour. The latter is the most rewarding of the standard symbols, paying up to 16 times your stake for three, four or five on a payline.

The sheriff himself is the game's Wild. This symbol can appear stacked on the grid and substitutes for all standard symbols to help form a winning combo. The Wild also acts as a symbol in its own right, paying up to 20 your stake for three, four or five in combination.

Sheriff of Nottingham slot has a wide betting range so players with all kinds of budgets can get in on the action. With 25 paylines to play across, there’s lots of fun to be had with this iSoftBet game. In terms of prizes, the most the slot will pay out is 600x your bet.

However, it's worth noting that Sheriff of Nottingham slot is medium volatility, which means it may not have enormous pay-outs but the pay-outs are more consistent. The RTP is set at 96%, which is bang on average for a slot these days.

Like most slot games, Sheriff of Nottingham slot comes with various bonus features including the Pick a Royal Letter feature, the Robin Riches Free Spins feature and the Wanted Respins feature. Below, we explore these in more detail.

First up is the Pick a Royal Letter feature. At any point during the base game, this feature can be triggered at random and award a random modifier. When the round is activated, you choose a letter to play with one of the following:

Sheriff of Nottingham slot is all about the Robin Riches Free Spins feature. During the base game, keep your eyes peeled for the Crown Scatter symbol.

When it lands on the first, third and fifth reels simultaneously, you'll trigger the Robin Riches Free Spins feature. In addition to eight Free Spins, you can enjoy In-Sync Reels when multiple reels spin together and display the same symbols.

During the base game, look out for the five Merry Men. If all five symbols appear on the grid, you'll trigger the Wanted Respins feature. You'll then be granted three Respins. If another Merry Man lands during the round, the number of Respins will reset to three.

When all Respins have been played, the Merry Men will reveal their monetary value and all wins will be paid. If the Wild appears during the round, the character values are collected, and the symbols are removed. This opens up space for more Merry Men to land. The Sheriff of Nottingham Wild is also active during the Wanted Spin modifier.

Overall, this iSoftBet slot is impressive – packed with bonus features, this innovative slot offers base game wins of up to 500x your stake per spin. The Wanted Respins feature takes things up a notch, offering top wins of 600x your stake.

Looking for a slot with a decent backstory? Sheriff of Nottingham slot will not disappoint. Based on the tale of Robin Hood, it will appeal to any players who enjoy the fairy tale theme.