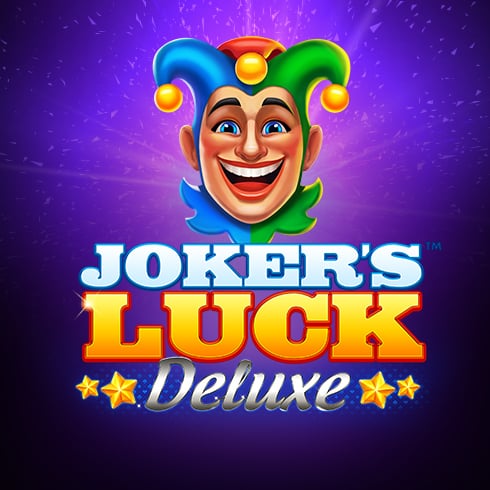 Joker’s Luck Deluxe is a Skywind Group online slot, famous for being the sequel to the largely successful Joker’s Luck slot. Without any doubt, it is an obvious improvement on its predecessor, considering its enhanced appearance, less complicated play, and lest I forget, enticing bonus features.

Joker’s Luck Deluxe is a Skywind Group online slot, famous for being the sequel to the largely successful Joker’s Luck slot. Without any doubt, it is an obvious improvement on its predecessor, considering its enhanced appearance, less complicated play, and lest I forget, enticing bonus features.

Joker’s Luck Deluxe is not the regular type of online slot, and that’s evident in its set up on the NetBet Casino. Taking a quick glance, a 3x1 set of reels might seem boring, but it only further underlines the point of simplicity.

The single payline feature doesn’t make it less interesting and lucrative, although it might be initially perceived as such. Interestingly, its wide range of betting value is one that can be greatly exploited. While placing your wager gives you the liberty to play for fun, or better still, for maximum and sizeable returns.

As earlier stated, the major selling point of the Joker’s Luck Deluxe slot is the fact that it is a improved version of its prequel. Although the colours are not overly flamboyant, the blend of hue is right on song. Meanwhile, as you spin your way to profitable winnings, the classic sound effects will leave you with a feeling of nostalgia.

Fortunately, you are just a click away from satisfying your senses, and more importantly filling your pockets. The three paying symbols go from the gold bell, the gold star to the golden horseshoe in order of increasing value. The joker symbol is a denotation of the Wild, albeit the red joker is not one to mess with, as it depletes your cash pot to zilch upon activation.

Joker’s Luck Deluxe is a very unique online slot game, and this uniqueness is emboldened by the cash pot feature, which will have you asking for more after your first try here. There are three pay towers, with each of these pay towers associated to one of the three paying symbols. On each pay tower, you will find eight to 16 levels, and upon jackpot, one of these levels is activated.

Furthermore, on the pay tower, it is important to note that there is higher value with increasing level. Now, you will find the cash pot on the right of the reels, with all of your cash prizes amassed in the pot. With your returns safely kept in the cash pot, you are afforded the options of cashing out on your earnings or to keep on spinning, albeit with the red joker - the villain that is ready to plunder your earnings - in mind.

Thinking of getting started right away? Skeptical about using your mobile phone for the first time and perhaps subsequent times? You can begin right away on NetBet Casino, and yes, with your mobile phone. Its impeccable mobile quality is definitely not unconnected to the care taken in the design. And the online slot is compatible with both iOS and Android mobile gadgets.

While Joker's Luck Deluxe slot is one with a very high volatility, it is worth noting that it has a relatively high Return To Player rate of 97.1%, which ranks higher than the 96% average of casino game slots. Having heard that, there is no way you won't be itching to get started on this video game. And without the troubles of signing up, you can see for yourself on NetBet Casino.

Joker's Luck Deluxe slot was released by Skywind group, March 2021. And it has received certifications from UK, Denmark, Malta and Italy. It is pleasing to mention that your earnings from each spin could go from 0.5 to 210 times your wager, and the fitting clattering sound that comes afterwards will make you want more. Hence, start spinning on NetBet Casino with no hassles, and get fine rewards in no time.